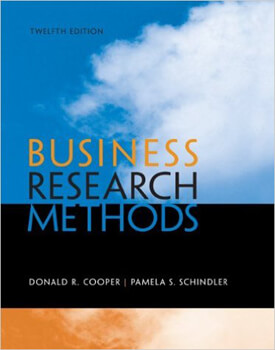 A GEM of a Study

This case deals with the concept of causal studies vs. descriptive studies and what needs to be included in the research design of each study type. It also deals with what constitutes control in research design; in this context it is best used with chapters 5 and chapter 6 although it may be used with chapters 6-9. This is also a great case to use to discuss constructs vs. concepts (Chapter 3), as Exhibit C-GEM-1.1 clearly has struggled with defining numerous constructs and multiple-measurement variables and, therefore, could be used to further explore text Exhibit 3-1. The case also mentions the use of standardized data; in this context you could use the case to explore how “standardized” data from different countries really is and where the student seeks such country-specific data.

The business start-up rate was found to have a high correlation with people’s perceived opportunities (0.88) and with the GEM Opportunity Perception Index (0.79)–which factors in perception of positive opportunity in a person’s country to start a business, the capacity (skills and motivation) to pursue the opportunities, the level of respect for entrepreneurial efforts by others in the society, and the level of resentment against those who do well in an entrepreneurial venture).

You could use this question to discuss factors not mentioned in the GEM Conceptual Model that might contribute to business/job formation and ultimately to higher GDP. One factor that usually comes up in such a discussion is creativity of ideas. This can generate a lively discussion about how the study could have measured for ‘creativity’.

Students might also mention demographic characteristics of the country, such as median age. Using Bill Gates as a model, you can expect many students to believe in the notion that entrepreneurial ventures are generally started by young adults. They might point out after you show the graphs below that Japan has a median age of almost 40 years compared to 34.3 for the U.S.  Also, the percentage of the population under the age of 15 in the US is 22%, compared with Japan at only 15%.  Additionally, students may raise the issue of economic stability. Given the unprecedented economic growth experienced in the U.S. in the latter part of the 20th century, they may want to use economic stability as a moderating variable.

Such variables need to be assumed, discounted, or controlled in order for causation to be proven with some degree of certainty. A great effort has been expended in this study to achieve high levels of both validity and reliability.  This question is designed to exhibit a lively discussion in the context of control as it is described in Chapter 9 Business Research Methods 12th