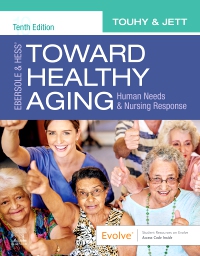 1. When asked by new parents what the life expectancy is for their African American newborn,
the nurse replies that, “2010 statistics indicate that your son:
a. will have a life expectancy of approximately 65 years.”
b. can realistically expect to live into his late 80s.”
c. has a good chance of celebrating his 75th birthday.”
d. is likely to live into his late 90s.”
ANS: C
In 2010, men in the United States at age 60 can expect to live another 22 years. The life
expectancy of African American men is about 4.7 years less than white men. Of the options
above, C is the only response that fits into those parameters. The other options are not
supported by reliable research.
DIF: Cognitive Level: Understanding REF: p. 3
TOP: Integrated Process: Teaching/Learning
MSC: Client Needs: Health Promotion and Maintenance

3. One reason why many “baby boomers” have multiple chronic conditions such as heart
disease, diabetes, and arthritis is that:
a. they have less access to medication and other treatment regimens.
b. there was a lack of importance placed on healthy living as they were growing up.
c. they did not have access to immunizations against communicable disease when
they were children.
d. they grew up in an era of rampant poverty and malnutrition.

ANS: B
The baby boomers, individuals born between 1946 and 1964, post-WWII, have better access
to medication and treatment regimens than other cohorts. They have had the benefit of the
development of immunizations against communicable diseases. They grew up in an era of
prosperity post-WWII. However, there was a lack of importance placed on what we now
consider healthy living when they were younger. Smoking, for example, was not condoned,
but was considered a symbol of status. Candy in the shape of cigarettes was popular, and there
was much secondhand smoke.
DIF: Cognitive Level: Remembering REF: p. 6
TOP: Integrated Process: Teaching/Learning
MSC: Client Needs: Health Promotion and Maintenance

4. A nurse is planning an education program on wellness in a local senior citizen center. The
nurse plans to provide education on the importance of immunizations, annual physical
examinations, screening for diabetes, and vision and hearing screening. It is important for the
nurse to understand which of the following?
a. Approximately 40% of older adults (ages 65 and older) utilize available preventive
services
b. Preventive strategies are more widely used in the 40-64 age group than in the 65
and over age group
c. The research on health promotion strategies in older adults demonstrates that they
have low efficacy
d. There is an abundance of research specific to health promotion and aging
ANS: A
Approximately 40% of individuals, ages 65 and older, utilize the preventive services that are
available to them. However, only 24% of those between the ages of 40 and 64 do so. There is
a paucity of research specific to health promotion and aging; however, the research that exists
demonstrates that health promotion strategies are highly effective.
DIF: Cognitive Level: Understanding REF: p. 7
TOP: Integrated Process: Teaching/Learning
MSC: Client Needs: Health Promotion and Maintenance