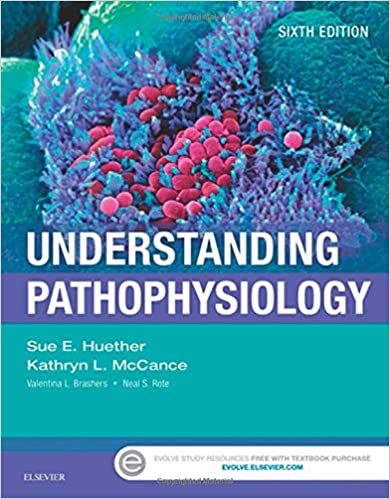 1. A student is observing a cell under a microscope. It is observed to have supercoiled DNA
with histones. Which of the following would also be observed by the student?
a. A single circular chromosome
b. A nucleus
c. Free-floating nuclear material
d. No organelles
ANS: B
The cell described is a eukaryotic cell, so it has histones and a supercoiled DNA within its nucleus; thus, the nucleus should be observed. A single circular chromosome called a
prokaryote contains free-floating nuclear material but has no organelles.
REF: p. 2

2. A nurse is instructing the staff about cellular functions. Which cellular function is the nurse
describing when an isolated cell absorbs oxygen and uses it to transform nutrients to energy?
a. Metabolic absorption
b. Communication
c. Secretion
d. Respiration
ANS: D
The cell’s ability to absorb oxygen is referred to as respiration while its communication ability
involves maintenance of a steady dynamic state, metabolic absorption provides nutrition, and
secretion allows for the synthesizing of new substances.
REF: p. 2

3. A eukaryotic cell is undergoing DNA replication. In which region of the cell would most of
the genetic information be contained?
a. Mitochondria
b. Ribosome
c. Nucleolus
d. Nucleus Cytoplasm
ANS: C
The region of the cell that contains genetic material, including a large amount of ribonucleic
acid, most of the DNA, and DNA-binding proteins, is the nucleolus, which is located within
the cell’s nucleus. Mitochondria is associated with cellular respiration, while ribosomes are
involved with protein manufacturing. Cytoplasm is a fluid filling that is a component of the
cell.
REF: p. 2

5. Which of the following can bind to plasma membrane receptors?
a. Oxygen
b. Ribosomes
c. Amphipathic lipids
d. Ligands
ANS: D
Ligands are the only specific molecules that can bind with receptors on the cell membrane.
REF: p. 9

6. A nurse is reviewing a report from a patient with metastatic cancer. What alternation in the
extracellular matrix would support the diagnosis of metastatic cancer?
a. Decreased fibronectin
b. Increased collagen
c. Decreased elastin
d. Increased glycoproteins
ANS: A
Only a reduced amount of fibronectin is found in some types of cancerous cells, allowing
them to travel or metastasize.
REF: p. 10

7. Which form of cell communication is used to relate to other cells in direct physical contact?
a. Cell junction
b. Gap junction
c. Desmosome
d. Tight junction

8. Pancreatic beta cells secrete insulin, which inhibits secretion of glucagon from neighboring
alpha cells. This action is an example of which of the following signaling types?
a. Paracrine
b. Autocrine
c. Neurohormonal
d. Hormonal
ANS: A
Paracrine signaling involves the release of local chemical mediators that are quickly taken up,
destroyed, or immobilized, as in the case of insulin and the inhibition of the secretion of
glucagon. None of the other options involve signaling that is associated with a local chemical
mediator like insulin.
REF: p. 12

10. An athlete runs a marathon, after which his muscles feel fatigued and unable to contract. The
athlete asks the nurse why this happened. The nurse’s response is based on the knowledge that
the problem is result of a deficiency of:
a. GTP
b. AMP
c. ATP
d. GMP
ANS: C
When ATP is deficient, impaired muscle contraction results. None of the other options are
involved in muscle contraction.
REF: p. 16

Select the fields to be shown. Others will be hidden. Drag and drop to rearrange the order.
Click outside to hide the compare bar
Compare
Compare ×
Let's Compare! Continue shopping