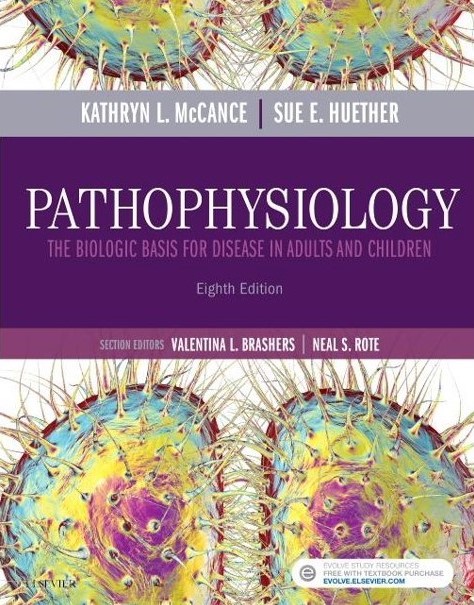 2. Most of a cell’s genetic information, including RNA and DNA, is contained in the:
a. Mitochondria c. Nucleolus
b. Ribosome d. Lysosome
ANS: C
The nucleus contains the nucleolus, a small dense structure composed largely of RNA,
most of the cellular DNA, and the DNA-binding proteins, such as the histones, which
regulate its activity. The other options do not contain most of a cell’s genetic information.
PTS: 1 REF: Page 2

4. Which cell component is capable of cellular autodigestion when it is released during cell
injury?
a. Ribosome c. Smooth endoplasmic reticulum
b. Golgi complex d. Lysosomes
ANS: D

PATHOPHYSIOLOGY 8TH EDITION McCance TEST
The lysosomal membrane acts as a protective shield between the powerful digestive
enzymes within the lysosome and the cytoplasm, preventing their leakage into the
cytoplasmic matrix. Disruption of the membrane by various treatments or cellular injury
leads to a release of the lysosomal enzymes, which can then react with their specific
substrates, causing cellular self-digestion. The other options do not correctly describe this
process.
PTS: 1 REF: Pages 7-8

6. During which phase of the cell cycle is DNA synthesized?
a. G1 c. G2
b. S d. M
ANS: B
The four designated phases of the cell cycle are: (1) the G1 phase (G = gap), which is the
period between the M phase (M = mitosis) and the start of DNA synthesis; (2) the S phase
(S = synthesis), during which DNA is synthesized in the cell nucleus; (3) the G2 phase,
during which RNA and protein synthesis occurs, the period between the completion of
DNA synthesis and the next phase (M); and (4) the M phase, which includes nuclear and
cytoplasmic division.
PTS: 1 REF: Page 37

PATHOPHYSIOLOGY 8TH EDITION MCCANCE TEST
Proteins act as (1) recognition and binding units (receptors) for substances moving in and
out of the cell; (2) pores or transport channels for various electrically charged particles
called ions or electrolytes and specific carriers for amino acids and monosaccharides; and
(3) specific enzymes that drive active pumps that promote the concentration of certain
ions, particularly potassium (K ), within the cell while keeping concentrations of other
ions, for example, sodium (Na
), below the concentrations found in the extracellular
environment. The other options do not correctly describe this process.
PTS: 1 REF: Page 13 | Page 15

8. Understanding the various steps of proteolytic cascades, such as caspase-mediated
apoptosis and complement cascades, may be useful in designing drug therapy for which
human diseases?
a. Cardiac and vascular disorders
b. Autoimmune and malignant disorders
c. Gastrointestinal and renal disorders
d. Endocrine and gastrointestinal disorders
ANS: B
Understanding the various steps involved in this process is crucial for designing drug
interventions. Dysregulation of proteases features prominently in many human diseases,
including cancer, autoimmunity, and neurodegenerative disorders. The other options do
not correctly describe this process.
PTS: 1 REF: Page 1